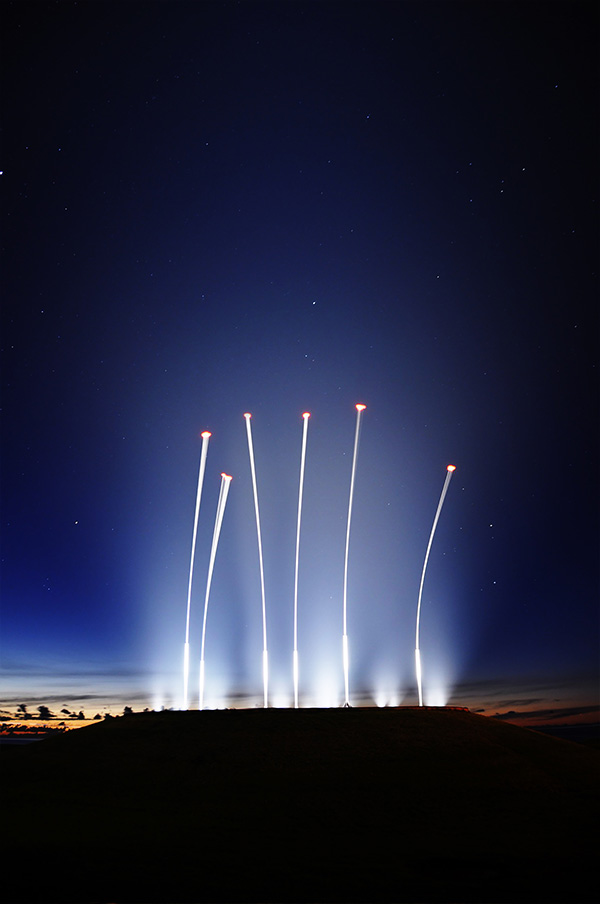 The artist for whom the now iconic Len Lye Centre was named experimented with an array of wind wands in the 1960s resulting in this sculpture (among others) which was installed at the East End Reserve, alongside the famed New Plymouth Coastal Walkway in March 2017, though is currently undergoing repair.

The six wands are made from slender hollow fibreglass tubes topped with coloured plastic spheres which light up at night. Five of the wands are 10 metres in height, while the sixth is 12 metres. The illumination is provided by 18 high-powered LED lights, set into the platform on which the wands are installed.

Lye described his winds wands as being so lightly balanced that if a bumble bee stood on the ball at the top it would dip a bit, and the more honey he carried the more it would dip.

The Waving Wands were first displayed at the Pulitzer Arts Foundation in St Louis, Missouri, USA in 2014. They were installed in a roof garden and were a huge hit with the populace – a local radio station even referred to them as a daily wind indicator.

Further along the Coastal Walkway, near the city centre, is the other renowned single Wind Wand. Installed in 2000, that spectacular work is 48 metres tall, with banks of LED lights in the red sphere at its tip.

Len Lye was a New Zealand born artist who made his mark in London as an experimental film maker and in New York as a kinetic sculptor. In 1980, following an exhibition of his works at the Govett-Brewster Art Gallery, Lye established the Len Lye Foundation to own his works and to continue his artistic vision. He chose for his works to be housed and cared for by the gallery.

Funding of $150,000 was provided for the sculpture in partnership with the Len Lye Foundation, New Plymouth District Council, Art in Public Places Trust and Technix Group Limited.