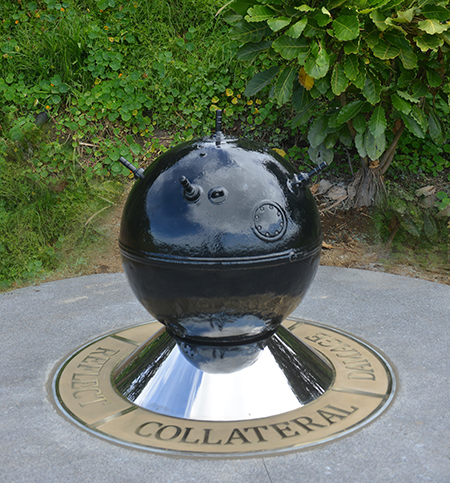 This World War 2 German naval mine washed onto the rocks near Belt Road in New Plymouth in February, 1943. It is believed the floating mine had been laid off the coast of South Australia by a German warship, but had broken free from its mooring and was carried by westerly currents across the Tasman Sea.

Its arrival created an emergency for the regional home-based defence force, with the local 2C Company Bomb Disposal Group being called on to disarm it. An engineering apprentice and squad member, George Wood, undertook the dangerous assignment. He attached a rope to the mine and swam the rope out to a rowboat which towed then towed it out to a tug.

From there the bomb was towed to sand dunes north of the Waiwhakaiho River where it was disarmed. It was taken to the bomb squad headquarters in Devon St and was still there when the group disbanded at the end of 1943.

During ensuing years it was displayed at various sites before being given to the New Plymouth RSA which displayed it in front of its former headquarters. When the RSA moved, the bomb was placed in storage at Port Taranaki before the Art in Public Places Trust was approached to consider a permanent display of the mine.

Taranaki sculptor and collage artist Dale Copeland was asked to design the installation and worked with PACE Engineering to realise the finished sculpture.

The artist hopes the title – Reflect Collateral Damage – brings home the fact that euphemism means real people are killed by military weapons, they are not just combat tools of nations.

The sculpture sits on the New Plymouth Coastal Walkway on a site near Belt Road. The cost for design, manufacture and installation was $35,000.