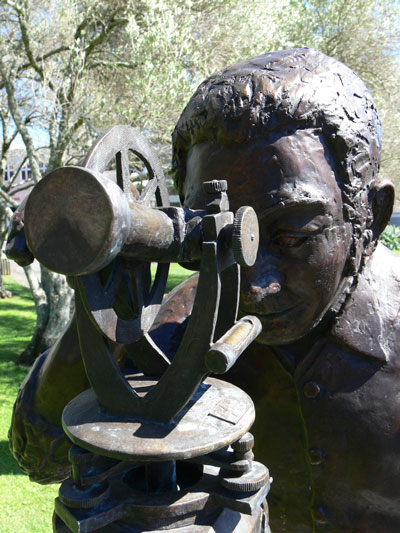 Known by many as The Father of New Plymouth, this statue was erected in the Robe Street Gardens, central New Plymouth, in 2011 in memory of the chief surveyor of the Plymouth Company who was sent to New Zealand to choose a site for settlement by colonists from the West Country of England.

In 1841 Carrington settled on an area between the Te Henui and Huatoki Streams for the new township. He produced a survey map of the future New Plymouth, including 2,267 quarter-acre sections, and set out more than 200 50-acre suburban sections and 1,150 50-acre rural sections toward Waitara.

Carrington returned to England in 1843, but came back to New Plymouth in 1857 where he settled. He served as government engineer and surveyor for Taranaki and later as provincial superintendent, member of the House of Representatives, and first chairman of the New Plymouth Harbour Board.

His name is perpetuated in the naming of Carrington Street and Carrington Road, and a marble tablet in the Cathedral Church of St Mary honours him as The Father of New Plymouth.

The project to erect the statue was organised by the Taranaki branch of the NZ Institute of Surveyors who commissioned local sculptor Fridtjof Hansen to create the work.

Funding of the required $124,000 was raised through various sources, including a New Zealand Lotteries grant and a grant from the Taranaki Savings Bank Community Trust. The Art in Public Places Trust contributed $42,000 towards the sculpture.