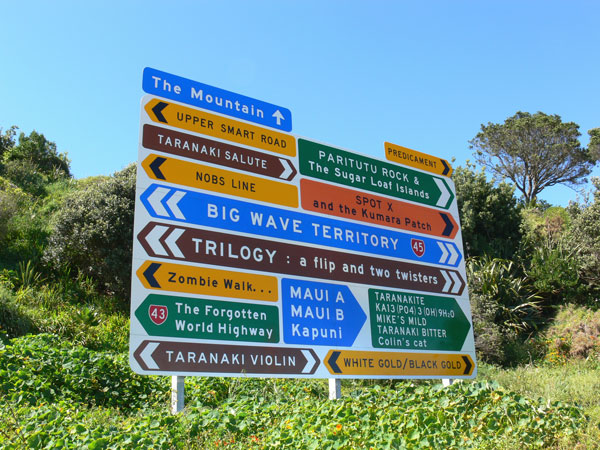 It gives directions to Trilogy: a flip and two twisters – in one direction a signpost to the iconic kinetic artwork by Len Lye held at the nearby Govett-Brewster Art Gallery and Len Lye Centre, but in the opposite direction another context of a reference to the tumultuous surf of the Taranaki coast.

Equally, Big Wave Territory directs to deeply Gothic novel penned in South Taranaki by author Ronald Hugh Morrieson – Predicament, an attempt by a local youth to enliven the streetscape after dark – Zombie Walk, and the foundations of the regional economy – White Gold/Black Gold.

John Reynolds lives and works in Auckland, and has established a national and international reputation as a painter who employs drawing, such as sketches, plans and doodles, and different types of expressive marks, symbols, and words for poetic effect. He has exhibited in numerous group and solo exhibitions throughout New Zealand, and in Hong Kong, USA, and Australia and is the recipient of a Laureate Award from the Arts Foundation of New Zealand.

The cost of Big Wave Territory was $80,000, of which $9,000 was raised by the Trust through the auction of smaller works by Reynolds, generously provided by the artist.