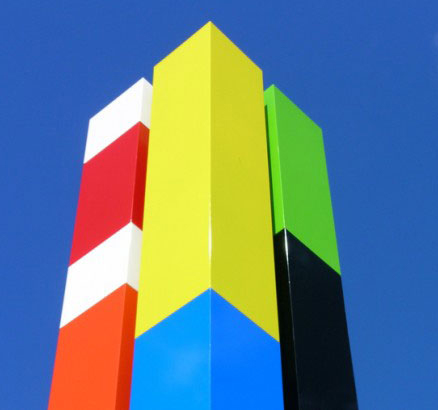 This powder-coated aluminium sculpture, created in 2003, was installed at Puke Ariki Landing in March 2013. The work refers to the Te Ataarangi system of Maori language teaching. This was devised by Katerina te Heikoko Mataira and Ngoingoi Pewhairangi  using Cuisenaire rods originally developed by Belgian teacher, Georges Cuisinaire, for teaching mathematics to children.

The Te Ataarangi system uses the rods as an integral part of a dynamic, total immersion classroom experience in which participants are encouraged to speak only Maori as they handle and exchange the different coloured rods.

Michael Parekowhai’s sculpture is a tribute to the success of Te Ataarangi and a monument to the renaissance of Te Reo. It is also a reminder of the fun method of maths learning that many New Zealanders experienced at primary school.

Parekowhai is one of New Zealand’s most important contemporary artists. His work has been included in many important exhibitions, including the Venice Biennale 2011, the Asia-Pacific Triennial, Queensland (2006-2007), the Gwangju Biennale (2004) and Biennale of Sydney (2002). The artist’s work is held in significant private and public collections in New Zealand and Australia, as well as in several permanent collections across the Pacific region and in Europe.

In his works Parekowhai plays with ideas of camaraderie, tools of teaching and learning, as well as quotations from modern art history and popular culture. His work being described as emphasising the extraordinariness of the ordinary.

Born in Porirua, Parekowhai is of Maori (Ngati Whakarongo) and Pakeha descent. He holds Bachelor and Master of  Fine Arts Degrees from Auckland’s Elam School of Fine Arts, where he is now Associate Professor of Fine Arts. In 2001 he was awarded an Art Foundation of New Zealand Laureate.

The cost of the sculpture, including installation, was $70,000