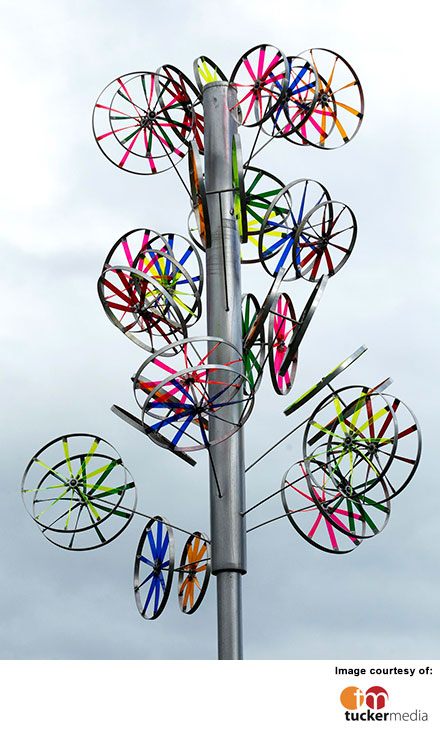 This sculpture, installed at Puke Ariki Landing, is an assemblage of giant pinwheels created with thin sheets of coloured fibreglass mounted with wire and attached to steel holders. These allow the pinwheels to spin freely, creating sounds as they move under even the lightest breath of wind.

Artists Lipika Sen and Prabhjyot Majithia note the spinning, twirling, dancing, swooshing whimsical sculpture reminds them of their childhoods in India, when alleyways came alive with a zillion buzzing joys in motion and they would run to see the Firkee-Wala peddling his toy pinwheels.

In this work the artists seek to recreate the larger than life awe they felt as children, when the pinwheels came to town. The irresistible firkees have now grown up in size and grandeur, but still trigger the gaping eyes of childhood and welcome us to the nostalgic experience while the Firkee-Wala has a rest.

The sculpture was made for the 2014 Kinetika festival – a celebration of art, design and engineering – and was purchased by the Trust for the site at Puke Ariki Landing.

The artists, who are based in the Bay of Plenty, work in many 3D forms as well as film. They have exhibited in a number of major sculpture shows and have toured several exhibitions around New Zealand.