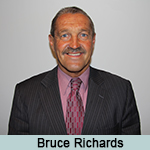 A director since 1987 and deputy chairperson of the TSB Bank, Bruce has been involved with a wide range of community interests since he arrived here from Auckland in 1967, working until his recent retirement as a director of Staples Rodway Accounting . Among attractions which drew him here were the mountain and surf, providing plenty of opportunities for his love of skiing and surfing.

He has served those sports well, at one stage becoming president of the Stratford Mountain Club, of which he is now a life member, and assisting both the New Plymouth Board Riders Club and Surf Taranaki in volunteer roles. Not surprisingly, his three children who were raised here are keen on surf and snow sports.

Bruce was a trustee on the Taranaki Rescue Helicopter Trust, and for nine years he served on the board of the Taranaki YMCA. His diverse interests also led him to becoming a foundation trustee of the Taranaki Festival of Arts, a position he still holds. With those and commitments to many other community activities it is easy to understand why he was awarded the NZ Order of Merit for services to the community in 2007.

“I love New Plymouth and I feel there is a lot we can do to enhance public areas with art works. Our walkway with some of the stone sculptures, the wind wand, and the John Reynolds ‘Big Wave Territory ‘ signpost is an example of the sort of work Art in Public Places Trust wants to promote,” said Bruce.