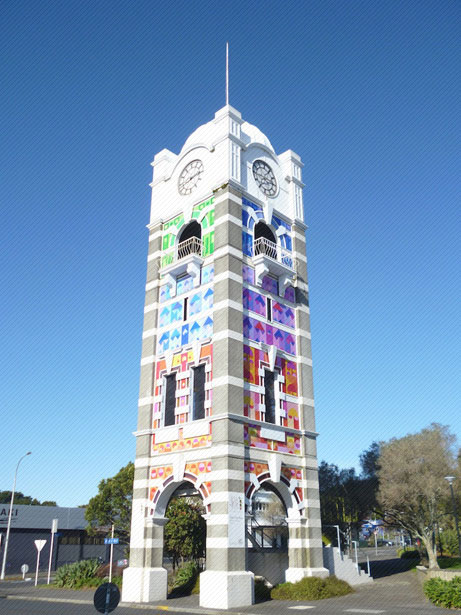 This temporary illuminated work was installed at New Plymouth’s iconic clock tower in August 2011 to coincide with the opening of the Taranaki International Festival of Arts and TSB Community Trust Lantern Parade. It was initially scheduled to remain in place during the Rugby World Cup fixtures and through to the end of the TSB Bank Festival of Lights at Pukekura Park in February 2012. However, the piece remained in place by popular demand until November 2012.

The project was created by Shannon Novak, a former New Plymouth man who is now based in Auckland where he specialises in the design of public illuminated works. It included the application of 3M film to the four huge faces of exterior glass surfaces of the clock tower, which was lit from within.

Lighting effects included “fountains” of falling sparks that cascaded down the four faces of the clock tower, and bright white “comets” more than 90 metres in length which were fired from inside the tower.

The installation cost $28,000, which also included de-commissioning the work.

“The public loved the work, and many asked if it could be kept. But the work was never intended for permanent display, and was beginning to fade and peel. However, we believe people enjoyed the fun of it, and these temporary installations provide an opportunity to enhance our community for both locals and visitors,” said APPT Chairman, Terry Parkes.